Daniel Negreanu opened Wednesday’s session by tanking often, which angered Doug Polk, who stepped away from the table briefly to force Negreanu to speed up the action. He then returned to the virtual felt and proceeded to demolish his opponent yet again. 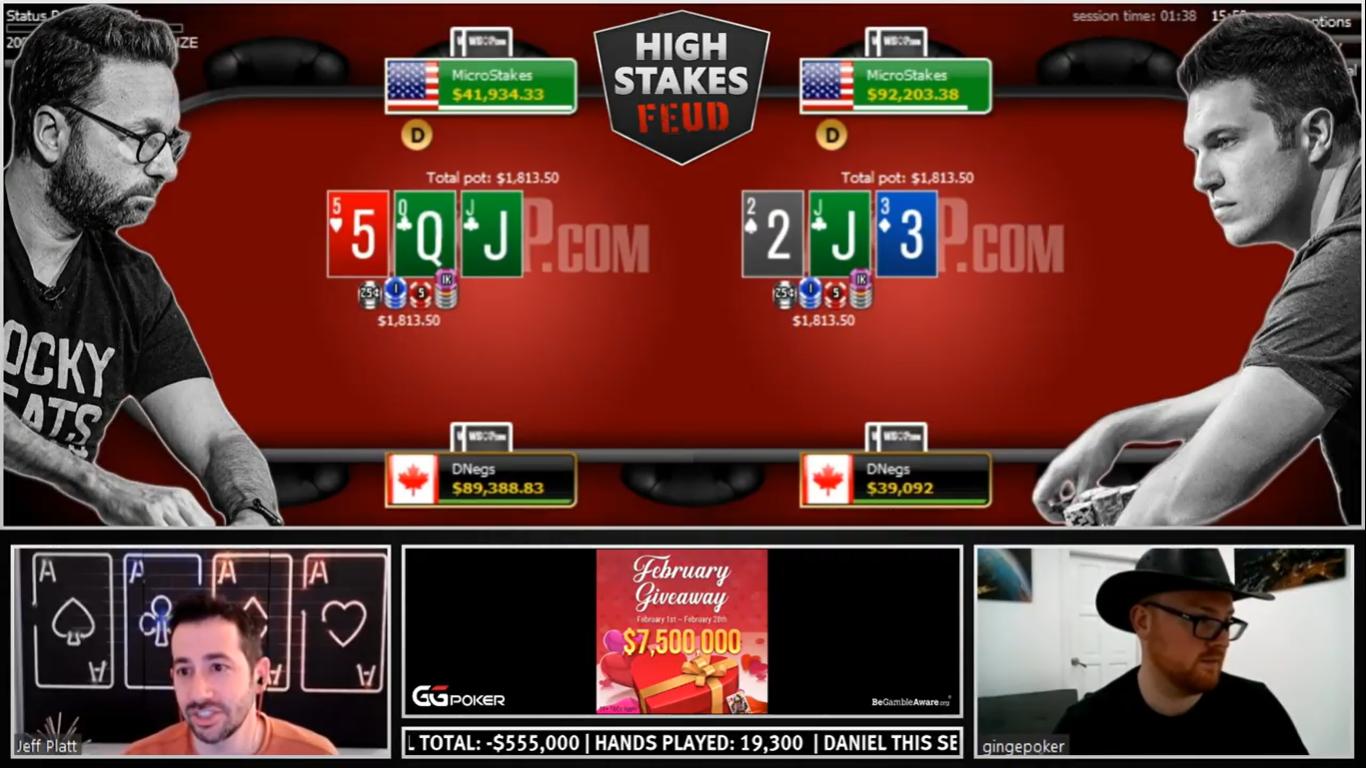 It appears the days of these two fierce rivals despising each other are back. After two months of cordial behavior between them, the bitterness has returned.

On Day 32, Polk changed up his style of play and began limping buttons pre-flop. He did so because he is attempting to lower variance to preserve his massive lead down the stretch of this 25,000-hand, heads-up No-Limit Hold’em challenge.

The poker pros returned to the WSOP.com poker site on Wednesday for Day 33, with Polk in the lead by $565,708. Negreanu, perhaps as a way to bait Polk into playing a higher-variance style, opened the session by frequently tanking. That was a bit odd, coming from someone who’s openly criticized the practice in the past.

Sick of online poker tanking and stalling? @GGPokerOfficial uses a final table clock that rewards those who save their time for when it matters most!

Polk sat out about 35 minutes into the session in protest. He called Phil Galfond, the designated mediator when controversies arise during the challenge, in hopes of forcing Negreanu to play faster. Galfond ruled that tanking isn’t against the rules, but encouraged Negreanu to speed things up.

Early in the match, Polk took to Twitter to bash his long-time rival. It was the first time since the match began that he took a shot at Negreanu publicly.

The rivalry is back, and the gloves are coming off. Polk and Negreanu returned to the felt following the Galfond call, and the tanking came to a stop.

Polk picked up the aggressiveness and began to completely obliterate Negreanu, winning numerous large pots. Negreanu’s early lead of about $60,000 quickly dwindled to nothing, and before long, the GGPoker ambassador faced a massive deficit.

After 560 hands, Negreanu lost $136,239 and now trails by $701,948 with 5,078 hands remaining. Negreanu shared his reasoning for tanking in his post-game interview on the GGPoker YouTube channel.

“We were playing pretty quick for the most part, and then, you know, he basically chose, totally within his right, I got no problem with it, he wants to limp, he’s allowed to limp, right,” Negreanu said. “The issue is the defense against the limping strategy requires me to, because I’m basically gonna play it perfectly, just basically what I’m going to do against the limp is I’m making no decisions pre-flop.”

He went on to explain that he began tanking because he needed to take more time to think through his decisions with Polk playing a new, confusing style. Many on social media, including 2012 WSOP Main Event champion Greg Merson, weren’t buying it, and brought Negreanu’s character into question.

As someone who bet a lot on the other side i was starting to really not care if you made the comeback and lost me $ cause i thought it would be pretty hilarious for all the shit Doug has said over the years but after seeing this I’m max oi mate, hope you get showered

Polk asked his Twitter followers what they thought of Negreanu tanking. Of the more than 6,700 voters, over 41% said the move was “totally fair play,” while 37.8% voted for “scummy move.”

The tanking clearly didn’t help Negreanu, who may have lit a fire under Polk. After that session, Negreanu’s already slim chances of winning shrunk even further. The Poker Hall of Famer desperately needs to turn the tide on Day 34, which begins at 2:30 pm PT Friday.

Semi-pro poker player with 17 years experience on the felt and more than five years working as professional poker media.

This site uses Akismet to reduce spam. Learn how your comment data is processed.

Did you know about our poker forum?

Discuss all the latest poker news in the
CardsChat forum