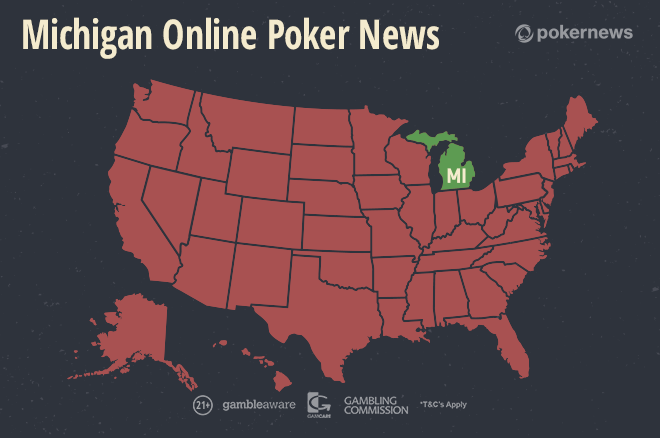 At the end of 2019, Michigan legalized online gaming, including poker. Now, more than a year later, the first hands of online poker have been dealt making Michigan the fifth state to offer legal online poker.

PokerStars, the world’s largest online poker operator, became the first to launch real-money poker in Michigan. They did so alongside FOX Bet and Stars Casino, which are offering sports betting and casino games respectively. The real-money brands are partnered with the Little Traverse Bay Bands of Odawa Indians Gaming Authority.

Although the launch was reported to be happening around 11 a.m. in Michigan, it seemed that it took a couple of hours for the first games to get rolling. Around 1:30 p.m., a screenshot circulated on social media appeared to show action underway at a $0.50/$1 no-limit hold’em table. Some players reported having deposit issues early on, but the action is indeed underway.

PokerStars will offer players the same options found in Pennsylvania and New Jersey, meaning a full slate of daily tournaments and the famed COOP (Championship of Online Poker) series – which will be called MICOOP (Michigan Championship of Online Poker). When that will take place is to be determined. At launch, Michigan will be a segregated market, meaning right now their player pool will not join those in other states. However, at the end of December, Governor Gretchen Whitmer did sign a law allowing for interstate play, though that doesn’t go into effect until March 29.

“The key differentiators for us have always been our valued partnership with the FOX Corporation and the strength of our industry-leading FOX Bet Super 6 product combined with the PokerStars business and we plan to lean into these unique assets as we launch in Michigan,” said Kip Levin, FOX Bet CEO. “Behind FOX Bet Sportsbook, PokerStars and Stars Casino, customers create one account for all three apps, unlocking a wide variety of exciting and entertaining options to supercharge the experience for our Michigan audience.”

FOX Bet Michigan will allow sports fans to bet on such things as NFL, NCAAF, MLB, NBA, NHL, NASCAR, and international golf, tennis, and soccer. They will also have a presence in the state via the airwaves.

The trio of brands, which can be accessed by downloading the apps via Apple or Android devices, is also welcoming new customers in Michigan with an exclusive free $100 in site credit upon account creation.

For additional info on the legalization of online poker in the United States, have a look at our exclusive US Poker Map and our guide to the Best PA poker sites.