As of today, the PokerStars Michigan poker client is available in the Wolverine State, making it the third state behind New Jersey and Pennsylvania in which the operator offers legal and regulated real money online poker.

The software client became available after the official approval at 11 am on Friday, January 29. It includes a full array of ring games alongside MTTs, SNGs, and the popular Spin & Go jackpot format. Furthermore, the Stars Casino and the FOX Bet Sportsbook are also available through the main lobby.

PokerStars MI was given the green light to launch today by the Michigan Gaming Control Board (MGCB), and in partnership with the Little Traverse Bay Bands of Odawa Indians Gaming Authority (“Odawa”), became the first online poker room in Michigan.

Since going live, we have had the chance to look through the PokerStars Michigan client and take note of some of the important features and offerings that will interest online poker players in Michigan.

Upon opening the client for the first time, players will notice that the Quick Seat lobby feature for ring games is enabled by default, allowing players to jump into cash game action by selecting the game type, buy-in, stakes and maximum number of players at the table.

Players can quickly tab to see all games and even create their own favorites list.

One thing that you will notice upon jumping into or observing a game is that PokerStars MI features the latest Aurora graphics engine allowing users to experience smooth animations, vibrant sound effects and other interactive elements which enhance the playing experience.

Another thing that is immediately apparent is that dark mode has been enabled by default for every user.

And as noted earlier, the lobby includes direct access to both Stars Casino games and the FOX Bet Sportsbook. 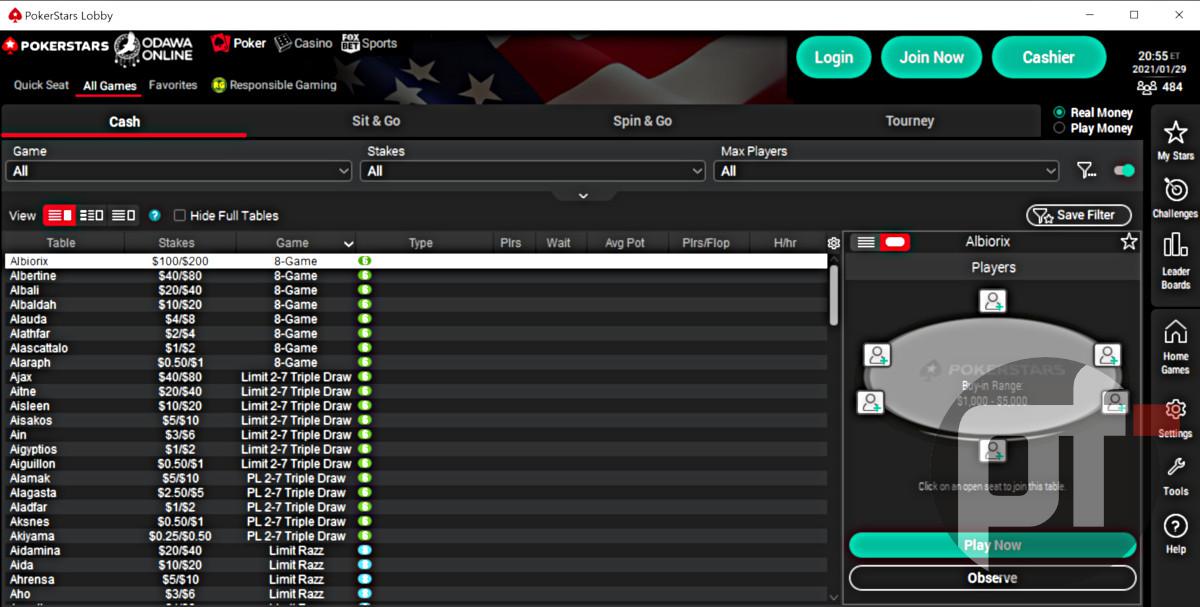 Those familiar with the PokerStars brand have come to expect a wide variety of cash games from the worldwide leader in poker, and its Michigan offering holds true to its reputation.

A first look at the lobby reveals plenty of mixed games that Michiganders can take part in right after making their deposit. Unlike other competitors in the regulated US online poker markets, PokerStars has included a variety of popular mixed game variants.

Available in a variety of stakes and table sizes, the following cash games are being spread at launch:

All these game types are available as cash games, and the filters in the main lobby indicate that they also may be available in tournament format in the future.

There are also games such as Short Deck (6+ Hold’em) in the lobby filters that are not currently being spread, but it is unclear if this is the result of using code from its .com client or if PokerStars MI has plans to offer these additional games at some point in the future.

The scheduled multi-table tournaments (MTTs) for PokerStars MI on opening day were mostly No Limit Hold’em and featured buy-ins ranging between $3 and $50, but there were a couple of PLO tournaments on the schedule too.

Nearly all of the MTTs observed at the time of writing had guarantees that ranged from $50 to $500, and the schedule is certain to grow further as soon as the traffic picks up.

A full slate of Sunday Majors is also expected to be announced soon.

Spin & Gos Available in Michigan Along with Turbo and Hyper SNGs

Like in other US states, the Sit N Go (SNG) lobby at PokerStars MI only includes No-Limit Hold’em and Pot-Limit Omaha. The SNG buy-ins range from $1 to $500, and the only available formats listed are Turbo 6-Max and Hyper Heads-Up for both game types.

The popular Spin & Go format is also available for Michiganders with four different buy-ins listed: $1, $5, $10, and $25. PokerStars online poker players on US soil can already take part in the popular jackpot format in New Jersey, but Spins are not available in Pennsylvania.

No Interstate Online Poker Available in Michigan Yet

For now, all the PokerStars MI action will be ring-fenced allowing Michigan-based players only. However, it is expected that PokerStars will form a shared liquidity pool with its operations in Michigan, New Jersey and Pennsylvania.

Governor Gretchen Whitmer approved a series of bills on December 29, 2020, including SB 991 bill. The bill essentially paves the way for interstate online poker for Michigan once they sign the necessary interstate treaty and approve operators on a case-by-case basis.

If PokerStars US interstate network indeed becomes a reality in the near future, it may also result in the launch of online poker in West Virginia, which has already legalized online poker, but to date, no operator has launched online poker operations yet in the Mountain State.